You’ll never find a high-end workstation or a gaming PC that’s quite as small as Intel’s original NUC lineup, but there are options if you want a tiny but high-performance desktop. One of those is Lenovo’s new ThinkStation P360 Ultra, a mini desktop that crams Intel’s 12th-generation Alder Lake desktop CPUs, Nvidia RTX A2000 and A5000 GPUs with up to 16GB of VRAM, and a surprising amount of expandability into a small enclosure that’s just 3.9 liters in volume.

The ThinkStation has lots of ports for a system its size, with a total of seven DisplayPort outputs in back (three full-size ports wired to the integrated Intel GPU, and four mini DisplayPorts connected to the dedicated GPU), one 2.5Gbps Ethernet port, another 1Gbps Ethernet port, and four rear USB-A ports on the back. On the front you’ll find a headphone jack, another USB-A port, and a pair of Thunderbolt 4 ports. 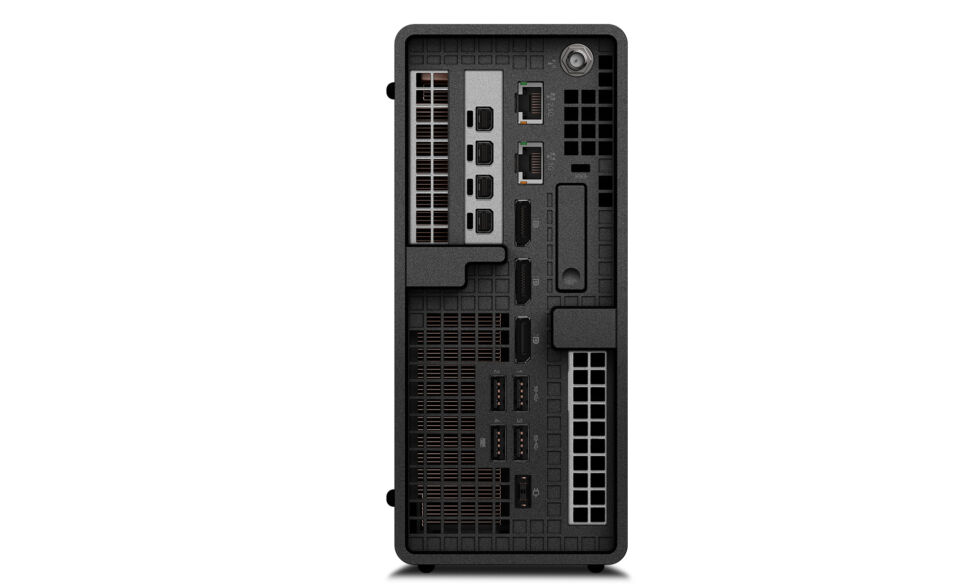 The P360 Ultra’s port selection is a lot like what you’d get in a good mini ITX motherboard, including lots of display outputs from both the integrated and dedicated GPUs. (credit: Lenovo)

Internal expandability is good, too. The ThinkStation can fit a total of two M.2 SSDs and a single 2.5-inch hard drive or SSD and up to four DDR5 RAM modules. The 12GB RTX A2000 GPU option should perform somewhere in between an RTX 3050 and an RTX 3060, while the RTX A5000 mobile GPU should perform more like the laptop version of the RTX 3080 GPU. Lenovo offers Alder Lake CPUs from the quad-core Core i3 all the way up to a Core i9 with a total of 16 cores (eight P-cores and eight E-cores—our CPU reviews show the benefits of these smaller cores for workloads that distribute well across many CPU cores).