The PCI Special Interest Group (PCI-SIG) has finalized version 6.0 of the PCI Express standard, the communication bus that lets all the stuff inside your computer communicate. The new version of the spec comes roughly three years after the PCI Express 5.0 spec was finalized, and version 6.0 once again doubles the bandwidth of a PCIe lane from 32GT/s (8GB/s in total, or 4GB/s in each direction) to 64GT/s (16GB/s, or 8GB/s in each direction). For a full 16-lane PCIe 6.0 connection, that’s as much as 256GB/s of total bandwidth, compared to the 32GB/s or 64GB/s of now-common PCIe 3.0 and 4.0 connections.

Like past PCIe versions, PCIe 6.0 will “interoperate and maintain backwards compatibility” with all existing PCIe versions, so your PCIe 4.0 GPU or SSD will continue to work in a PCIe 6.0 slot and vice-versa. The PCI-SIG bragged about the specification’s longevity in a blog post by PCI-SIG board member Debendra Das Sharma: “An interconnect technology is considered successful if it can sustain three generations of bandwidth improvement spanning a decade. PCIe architecture has far exceeded that mark.” 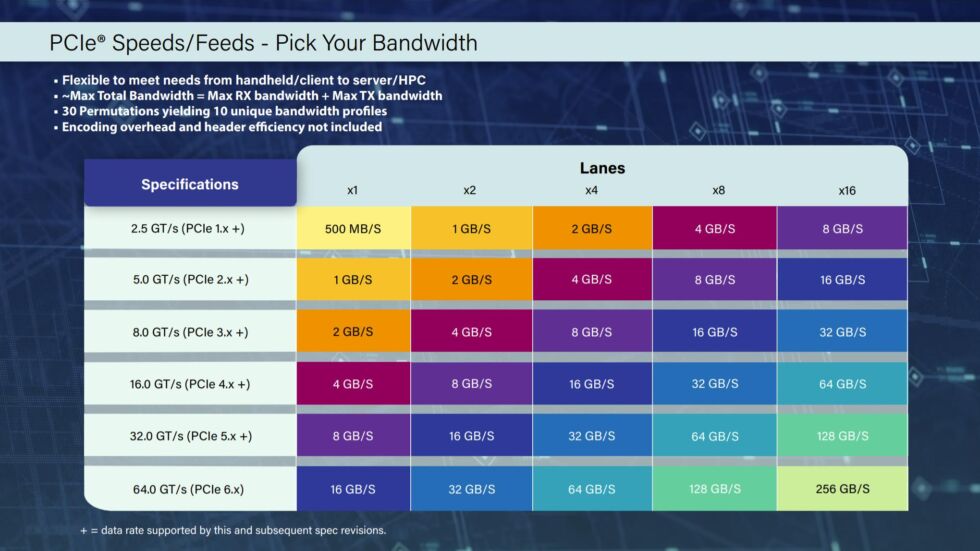 PCI Express speeds compared. Note that these bandwidth numbers are bidirectional—if you’re only sending or only receiving data, you’ll only have half as much bandwidth. (credit: PCI-SIG)

To boost its speeds, PCIe 6.0 uses a new kind of signaling called “Pulse Amplitude Modulation 4” (PAM4), which allows for faster data transfers than the previous Non-Return-To-Zero (NRZ) signaling at the expense of a higher error rate. To compensate, PCIe 6.0 includes technologies like Forward Error Correction (FEC) to correct errors and Cyclic Redundancy Checking (CRC) to ask for packets to be retransmitted when errors can’t be corrected. The PCI-SIG says that this combination of technologies should catch all errors without adding latency to the connection.